Floating gardens are a type of green space steeped in history. The technique of creating a floating garden was originally pioneered by the Aztecs but can now be found in many urban settings, offering an aesthetic and functional solution which provides breath taking views.

Here at SRS, a huge benefit of having a research programme looking at ways plants can help our communities become more liveable, is we often get products developed that have multiple uses. One such product is our hydroponic growing media that floats even with fully established plants on board. A floating garden.

Many of our marine and waterway ecosystems are under stress due to human activities. Our urban stormwater run-off, our agriculture practices and even our industrial effluent discharge all have a negative impact on our natural waterways. This often results in algal blooms or slow death of our many fragile water based ecologies.

Floating gardens of reeds and wetland grasses with their very large root masses filter out the nutrient content and other pollutants from the water. This was discovered with an immediate positive effect as we launched a floating garden on our own water reservoir that suffered from an algal bloom and so our floating gardens were started. What are our floating gardens made of?

Plants require air, water and nutrients to be available through their roots so as to sustain themselves and grow. Our hydroponic growing media is a foam matrix that has a honeycomb lattice of air holes throughout its mass that allows air, water and nutrients access to the plants roots as they grow through it. Since the foam is not biodegradable the growing media will outlast the natural lifespan of the plants growing in it, so it will not require replenishment of the growing media for the lifespan of the plants used.

Covering the foam is a felt and surrounding the modules of foam is a perimeter piping full of air to provide more buoyancy. This provides a floating island ideally suited for plants to grow upon. The island is modular and can be any shape and size. Watered and fed by the waterway it floats in, all we are required to do is match the plant species to the type of water the garden will be floating in. Salinity, pH, temperature and expected exposures to sun and wind are all considered in making the selection of what plants to use.

Floating gardens provide benefits for water quality and air pollution/climate change mitigation. They also act as a key additional habitat for a diverse range of water based, insect and bird species within urban areas.

Using plants to reduce the oversupply of nutrients to a water way or remove toxic compounds is also a win for the environment and the water authority.

Alternative approaches to floating gardens use aeration pumps, which are expensive to run constantly. A floating garden eliminates these costs, creating another win for the environment and reducing the cost of looking after the waterway. A floating garden can help to encourage the return of native wildlife including birds, insects, and water-dwelling animals.

Will this technology help my waterways?

There are many circumstances where our floating gardens will help keep your waterways clean and thriving.

Nurseries, botanic gardens, parklands, zoos, golf courses and water authorities all can benefit from having floating gardens in their approach to maintain healthy waterways.

Bird life, insects and many animals that dwell in these waterway ecosystems will also do well on the floating gardens and our felt covered media is resistant to the nesting efforts of many water birds.

The floating gardens can be tethered or free floating depending on circumstances and sizing of the “island” to the job required is where we can help.

The history of floating gardens

Floating gardens have a history that date back to the 10th and 11th centuries when the Aztecs developed a floating garden based on hydroponics.

Driven out of their land, they settled at Lake Tenochtitlan. Unable to grow crops on the lake’s marshy shore, they built rafts out of reeds and roots.

Originally, these floating gardens were known as Chinampa and they were widely used in Mexico Valley c. 1519 during the time of the Spanish conquest.

Back to the modern era, floating gardens are used around the world now for a variety of reasons. The Floating Gardens of Xochimilco in Mexico City is still one of the most famous example of floating gardens and a very popular tourist attraction. In Paris, floating gardens were introduced on the River Seine in 2017 to allow Parisians to enjoy nature. The gardens are planted with fruit trees, native plants and grasses and provide more ‘green’ space to the city.

In Rotterdam, floating zones were deployed to solve the issues around excess water due to the ‘geographical depression’ that the Netherlands finds itself.

Many other countries around the world are also adopting floating gardens and they are being used to help clean up waterways but also as a way of improving sustainability in local areas through vegetable gardens and other plantings.

Talk to us today

Here at SRS, we are one of the only companies here in New Zealand to offer a full turnkey service when it comes to floating gardens. From the structure to the planting to the installation, our team can deliver all aspects of the project and provide you with the right advice and guidance for a garden that works for your space. Talk to the team today. 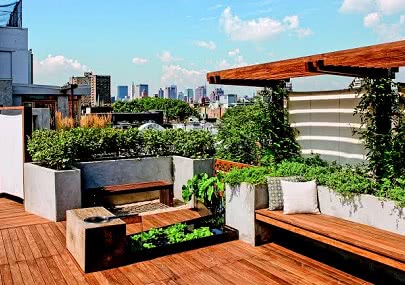